Chair of the Board of Directors: Jamie Holman

We are delighted to announce the appointment of our new Chair of the Board of Directors, artist and educator, Jamie Holman.

Jamie’s appointment marks a pivotal moment for the Festival of Making CIC as we continue to evolve the organisation and artistic programme towards delivering a full year-round programme of making along with our annual weekend festival.

Jamie Holman is a multidisciplinary artist based in Blackburn and leads BA Fine Art at Blackburn College University Centre, alongside working as one half of ‘Uncultured Creatives’ a collaboration with Curator and Producer Alex Zawadzki, delivering works in public, digital, print and traditional gallery spaces. In 2017 Jamie was commissioned as part of Art in Manufacturing Season One, undertaking one of the programme’s first residencies with the manufacturer, Roach Bridge Tissues and went on to become a core advocate for the festival.

Jamie’s work is multidisciplinary and is often fabricated using industrial processes or with heritage crafts makers and artists. His work is informed by the heritage of working-class communities, in particular the impact of the industrial revolution and the cultures that have manifested as a consequence of its emergence and subsequent decline.

In 2018 Jamie became a Festival of Making CIC Board Member, joining Co-Founders, Elena Jackson, Lauren Zawadzki and Wayne Hemingway MBE, working together to shape the future of the organisation. Since then the Board has recruited four additional members.

It is a great pleasure to welcome Jamie as the new Chair of the National Festival of Making. First working with the Festival in 2017 within an Art in Manufacturing residency with Roach Bridge Tissues, Jamie has gone on to be a core advocate for the Festival, initially joining as a board member. We have many shared aspirations for the work we can create in Blackburn, and the impact the Festival of Making can have in developing making and artistic opportunities. Jamie always places artists, and communities at the forefront of his own work and will no doubt champion that within his role as Chair. Being fully embedded in Blackburn, he has a unique understanding of Blackburn’s place in the world, historically and looking forward. As a Board, we look forward working with Jamie to develop the National Festival of Making and its plans for the future.”

We met with Jamie to find out more about his new role as Chair, his experience of working in Blackburn and the new work he’s creating.

Congratulations on your newly appointed role as Chair of the Festival of Making CIC Board of Directors, let’s go back to the beginning; what first drew you to your 2017 Art in Manufacturing commission and how did you find your residency?

Thank you, It’s been an exciting five years since I was first commissioned for the festival. That residency was an incredible experience and was a real turning point in my work and career. I was lucky that I was not only placed in a fantastic factory (Roach bridge Tissues) but also met the artist Charles Hadcock who mentored me during and after the Festival. I was able to make a large scale public choral art work that raised the visibility of my practice and with the support of the festival directors, I extended some of the research and as a consequence, I was invited to join the board the following year.

The National Festival of Making works with national partners and artists but its roots are in Blackburn where you’re also based, tell us a bit more about this place.

Blackburn is my home town, it’s where I still work at the Art School and where my studio is located. It’s difficult for me to be objective about the town because it’s a real love affair for me. The town has enormous potential for creatives and artists as there are buildings available to work in and a community of artists, designers and commissioners that bring exciting and innovative work, ideas and propositions to the table. I’m passionate about the cultural heritage of the town but equally excited about what we are doing here now with the support of the council and what we are going to do in the future.

Since your Art in Manufacturing commission, you have become a core advocate of the festival, why do you think it is important to advocate for the arts and the National Festival of Making?

In 2018 Blackburn was positioned as the town with the lowest engagement in arts and culture in the country, and had also been the focus of some negative national press and two Panorama documentaries that presented Blackburn as a divided town in terms of our communities. This is not the town I recognise and is not my experience of living and working here. The Festival is so important because it brings all of our communities into the town centre in an absolutely joyful celebration of gathering and making. We also make visible the incredible manufacturing, making and fabrication that is thriving across the county, it also gives a platform to creatives working from the kitchen table to National galleries and brings internationally renowned makers, thinkers and artists to the town.

After Art in Manufacturing, you went on to be Artist in Residence for the British Textile Biennial, be published by Rough Trade Books, exhibit new work and have work acquired into the Government’s Art Collection. Most recently you have been commissioned to make a new work to memorialise the seventy years that mark the Queen’s Platinum Jubilee, tell us about this period for your practice, and your new work?

Art in Manufacturing changed the way I work. I became excited by the potential of industrial collaboration and the potential of art works to be participatory and delivered in public spaces. I became interested in new models of working and began collaborating as a formal proposition with curator and producer Alex Zawadzki who I first worked with on the festival. We began to deliver these large scale, complex works across traditional gallery spaces, print, digital and public spaces but perhaps most importantly, Alex signed me to her Second Act gallery and began representing me. I started selling works internationally and was able to develop a recognisable and unique practice from a studio in Blackburn. I’ve just come to the end of a long period of commissioned works and am now making new work for future Second Act exhibitions and art fairs. Some of the pieces I made during the last few years are due to be shown at The Walker in Liverpool, Touchstones in Rochdale and in the U.S.A. which is exciting and the Lancashire Tapestry is showing at the Cathedral in Blackburn and will tour Lancashire and the Common Wealth so that work has a lot of life in it at the moment. 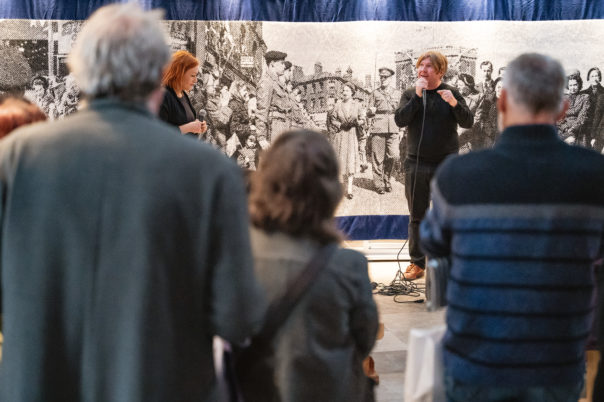 Looking back at previous year’s programmes, what has been your favourite National Festival of Making project and why, and what were you most excited about for this year’s festival?

Tough question. Really tough as there has been so much. I have a real affinity with all the artists from 2017 and really felt like I was sharing the festival with artists who were incredible so that remains a highlight for me. I really liked Liz Wilson’s digital commission (our first) and could see the future of some of our commissioning in that work. For that reason I was very excited about Liz’s work this year and for us to return to Tony’s Ballroom as it’s a much loved venue in the town.

What part of your new role are you most looking forward to and where does the Board want to take the organisation next?

The chair position is a huge responsibility and there are aspects of the role that are very formal, but what I am most excited about is the potential to extend the festival from a weekend event, to establishing an all year presence in Blackburn, developing our night time offer and for Art in Manufacturing to extend into international commissioning and exhibitions. There is a lot happening in Blackburn at the moment, the Festival has been a catalyst for so much of the success’s we are enjoying as a cultural destination, and as a town centre workspace for artists and makers, providing jobs for graduates and as a place where people enjoy living and gather together to experience incredible events, exhibitions and happenings. I want to see the festival continue to lead into the future so the town continues to grow

70 Years 70 Voices by Jamie Holman Studio, commissioned for the Queens Platinum Jubilee will be showcased at Blackburn Cathedral over the National Festival of Making and up to November 2022.