Following a soft launch at the National Festival of Making in 2019 and continuing with construction workshops at Blackburn College earlier this year, the Manchester-based maker joined up with Lancaster’s OEP Building Services to develop the ‘people’s architecture’. 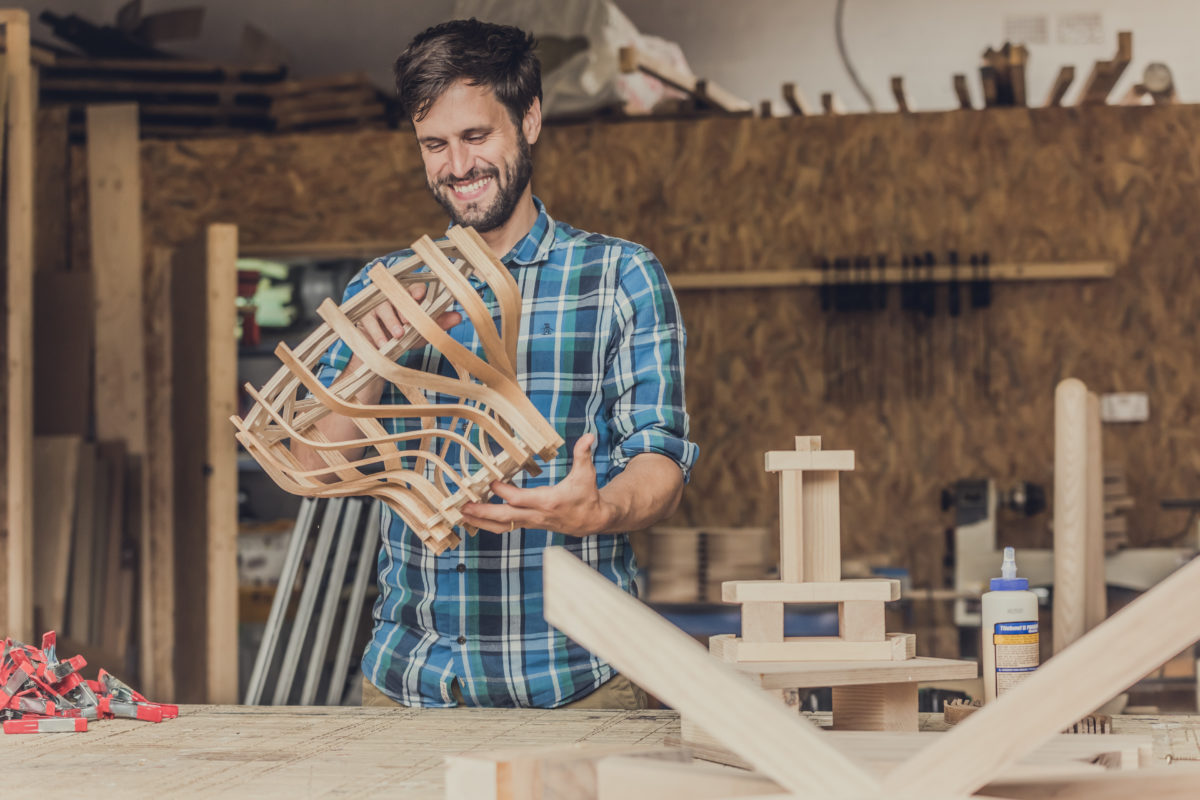 Commissioned as part of Art in Manufacturing, Tim Denton is working to explore the making potential across construction and design. Engaging festival visitors, the manufacturing workforce and students in an iterative and collaborative design process, the project will lead toward the creation of a new temporary installation. Tim Denton becomes the third, confirmed artist after the recent unveiling of residencies involving Hannah Leighton-Boyce and Raisa Kabir. 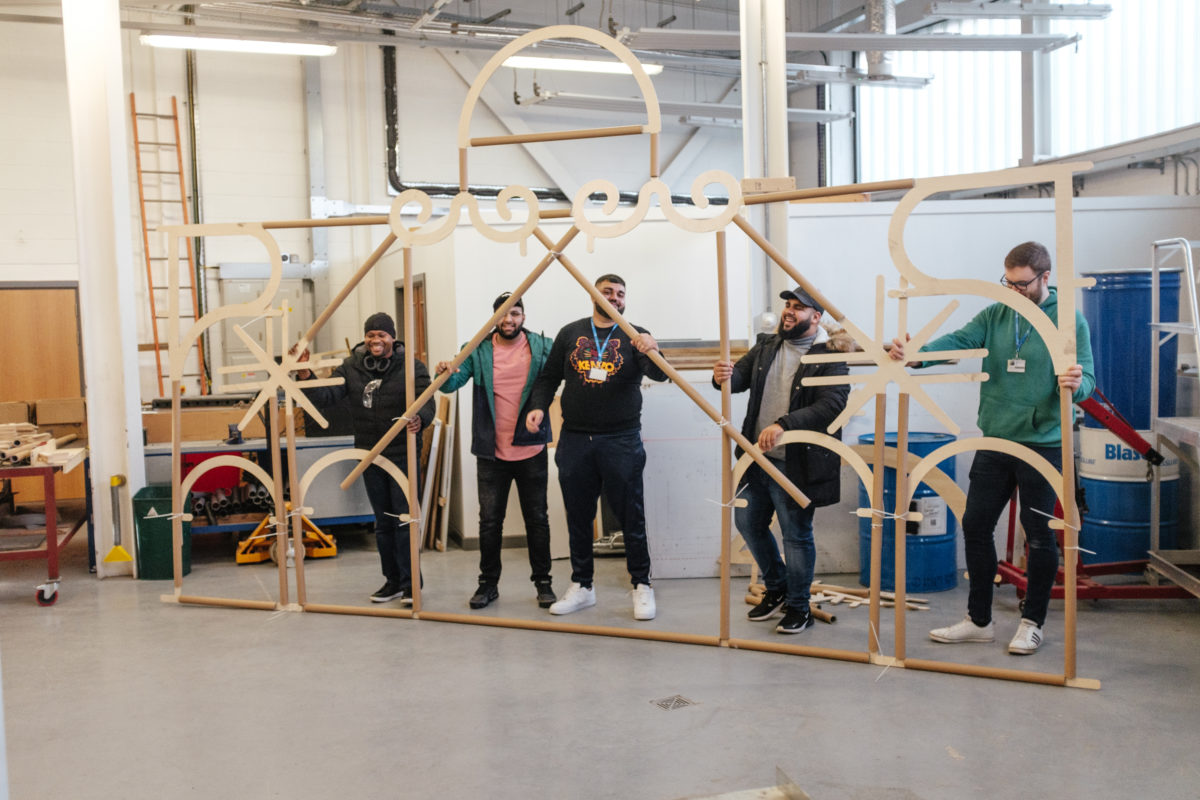 A specialist in developing purposeful, temporary interior and public realm based structures, Tim’s exciting ideas for the next festival remain under wraps, yet festival audiences have already played a major role in what’s to come.

Tim began by studying and documenting the architecture of Blackburn, the graphic elements, signage and patterns – details found in the public realm that often go unnoticed. Using the visual research as inspiration, the artist created bespoke workshop tools and presented ‘Blueprints’ a production line style workshop at June 2019’s festival, where he and 100’s of members of the public developed wild and inspired examples of fantasy architecture.

“We asked the question, what would a creative space for Blackburn look like? Where would its references come from, and what would be specific about it that would make it engrained in Blackburn culture?” 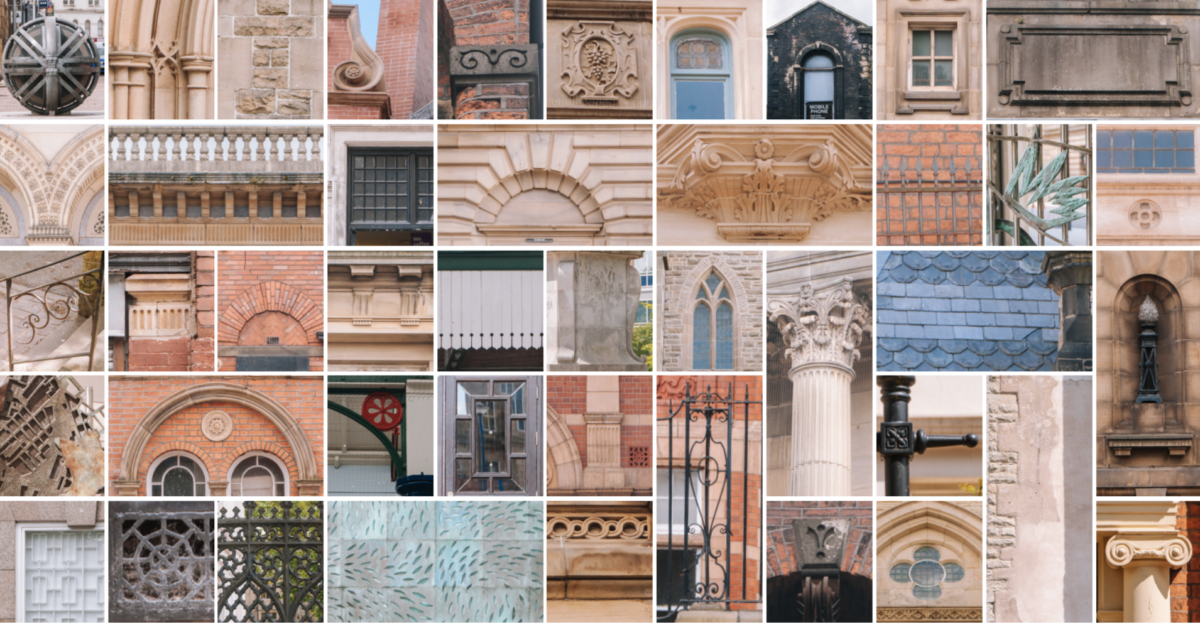 Paired with OEP Building Services, based in Lancaster and specialists in the development of pre-fabricated building systems, the designer’s starting point has been these inspirations – Blackburn’s public realm and a democratised co-design process.

“For me, the design process itself should be an open-ended thing,” says Tim. “Something that is truly surprising for all parties, including myself. I like taking each step, not knowing or controlling where the process is taking you. This project is truly representative of that way of working.” 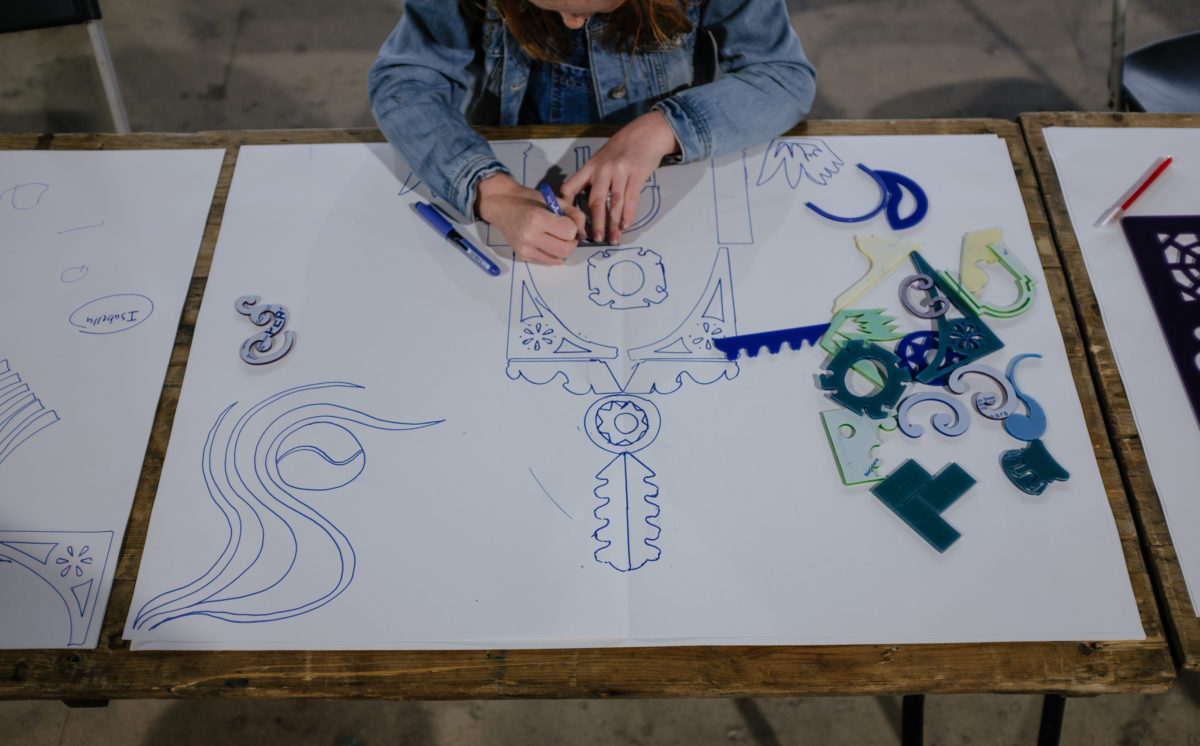 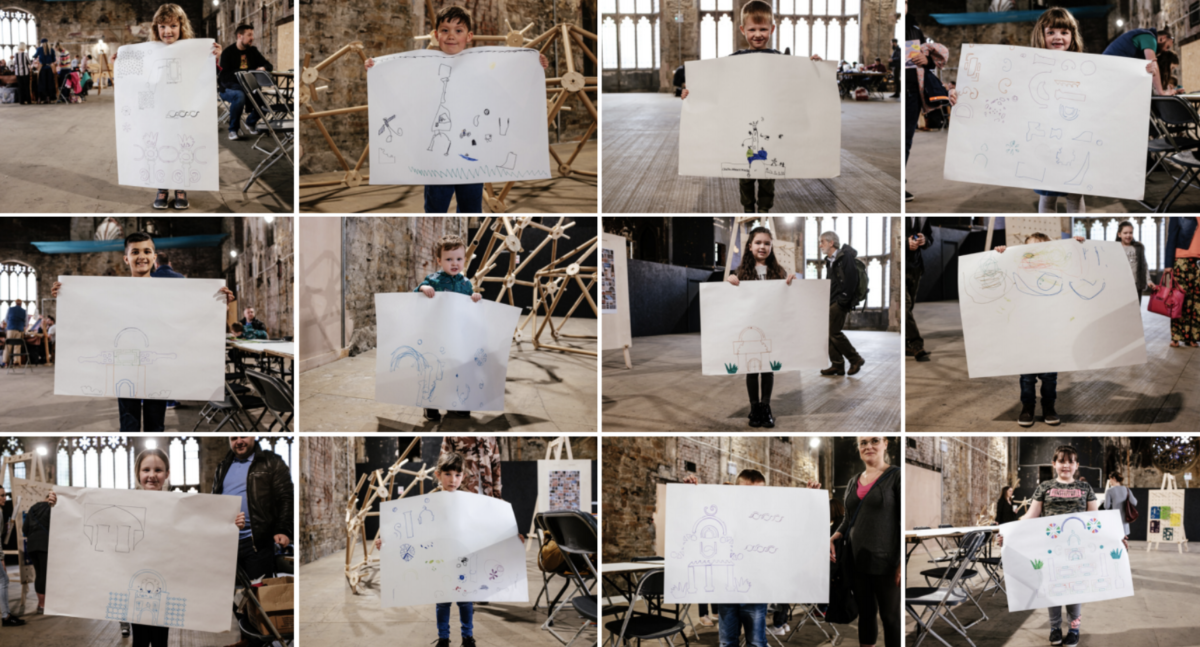 “Last June we created over 300 drawings of imagined architecture with children and adults, all created from stencils that were traced directly from architectural features found around Blackburn. By starting with forms taken from Blackburn, all of the designs are certain to relate to Blackburn in some way. The results were an eclectic mix of ‘blueprints’ that went on to inspire the next stage, which was this recent collaboration with mechanical and engineering students from Blackburn College to translate these designs into physical full-size models.”

Spending a day in one of the college’s impressive workshop facilities and working to ambitious scale, the group developed imposing structures that not only had physical presence, but structural integrity. The rudimentary materials of cardboard, plywood and cable-ties and their individual strengths and weaknesses were combined to create large scale outcomes that will in turn inform the next stage.

“They understood the need to actually make things that can stand up,” continues the designer. “So, as concepts were translated, they became more practical at the same time. Plywood and cardboard make for simple, but unfamiliar making methods, and is a very accessible way of engaging people in building expressive things.” 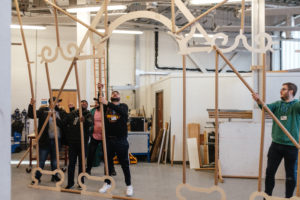 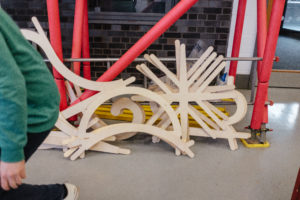 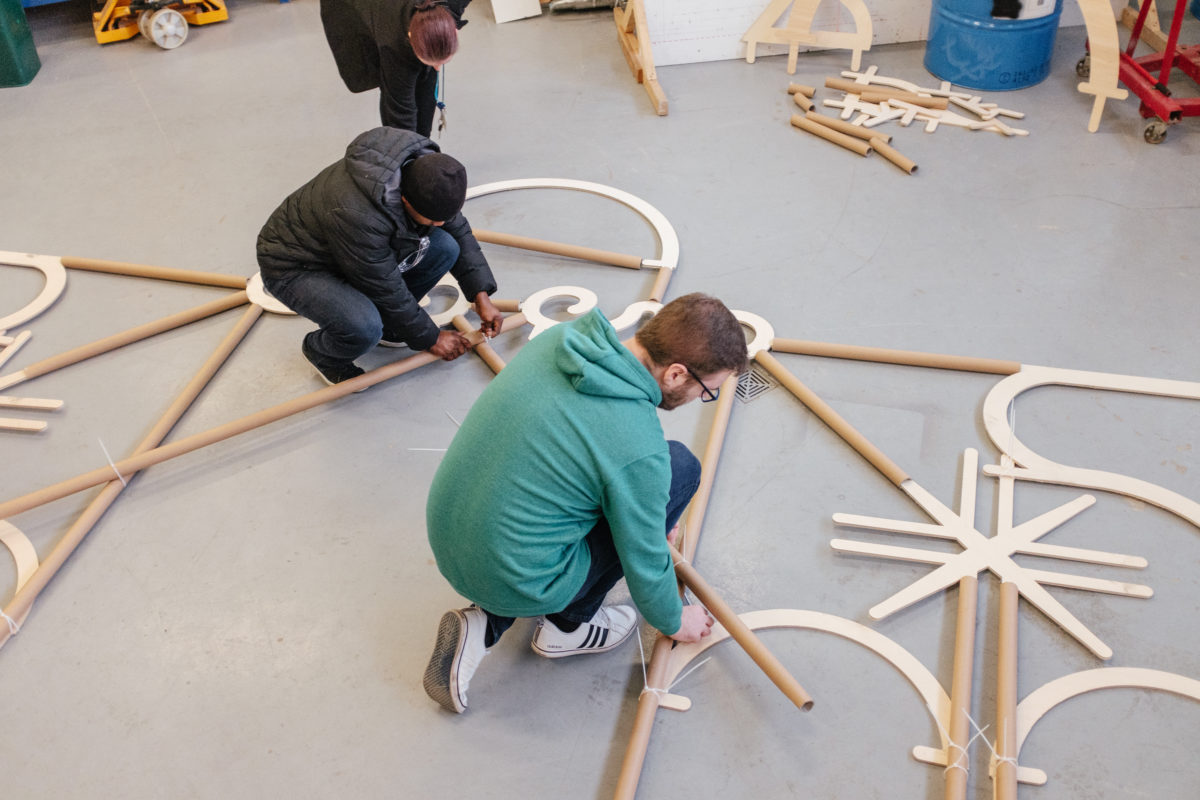 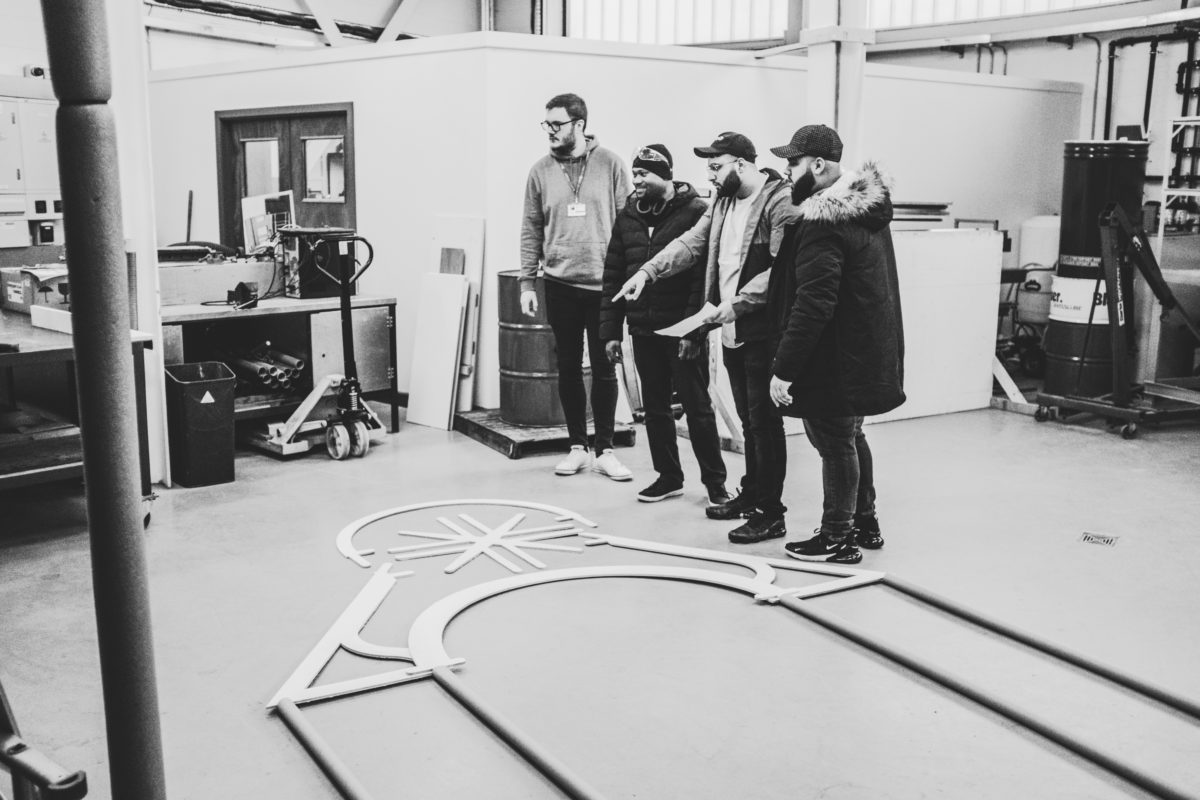 Partners of National Festival of Making, Blackburn College said, “Learning experiences are enhanced by contact with professionals who excel in their chosen field. Tim Denton’s work, the unusual nature of the project that he’s been asked to progress and the innate connection to our surroundings made his visit to the college the perfect example of meaningful, experiential learning. Tim’s trust in the students and genuine curiosity in their ideas made for a collaborative atmosphere, with a room-dominating, tactile outcome that proved just how productive the group had been.

Working from the outskirts of Manchester and frequently collaborating with property owners, developers, event producers and creative organisations, Tim’s Other notable works include a temporary structure developed for the NOMA complex, to mark the launch of Amazon’s Head Office, furniture designed for the Wrexham community through participatory workshops in association with Featherstone Young Architects and the recently launched Cap & Dove for artist Joshua Sofea. 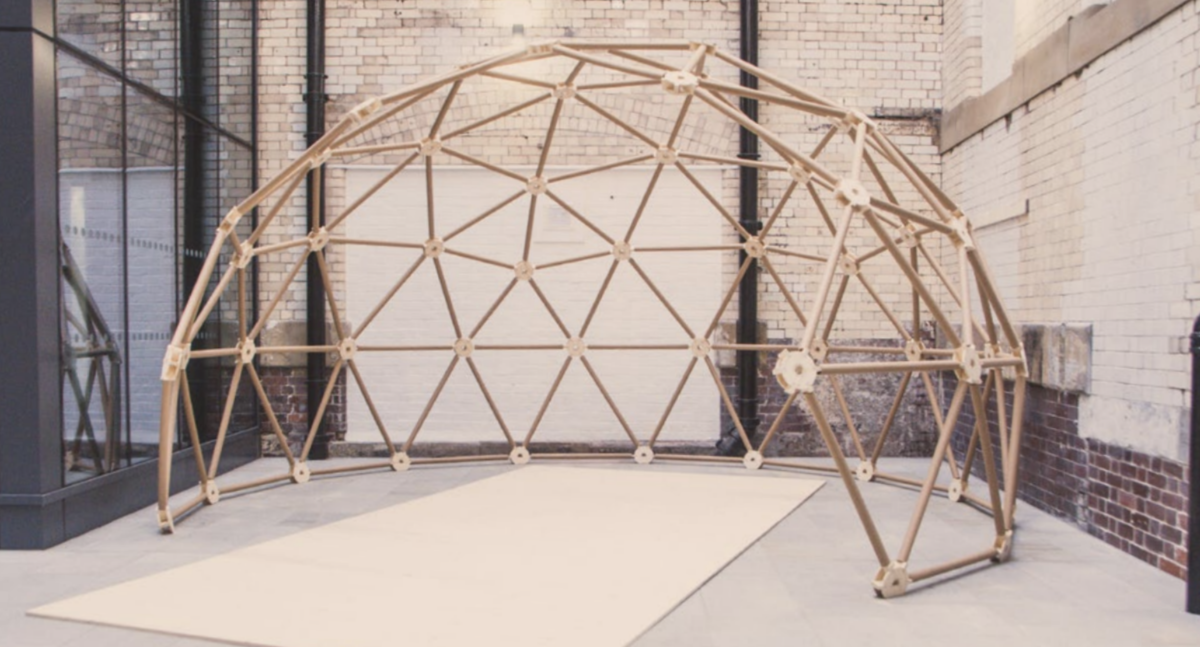 Looking ahead to engaging with the team at OEP, Tim will encounter design and fabrication expertise across a broad field of building design and installation, with the company developing timber based, prefabricated building systems, bespoke bathroom suites manufactured off site and the complete design and fit-out packages in the student accommodation and residential sectors.

“I’m keen to not shoehorn my working methods into their company,” says Tim. “But instead to capitalise on their skills, knowledge and expertise to create something that is relevant to and inspired by them.” 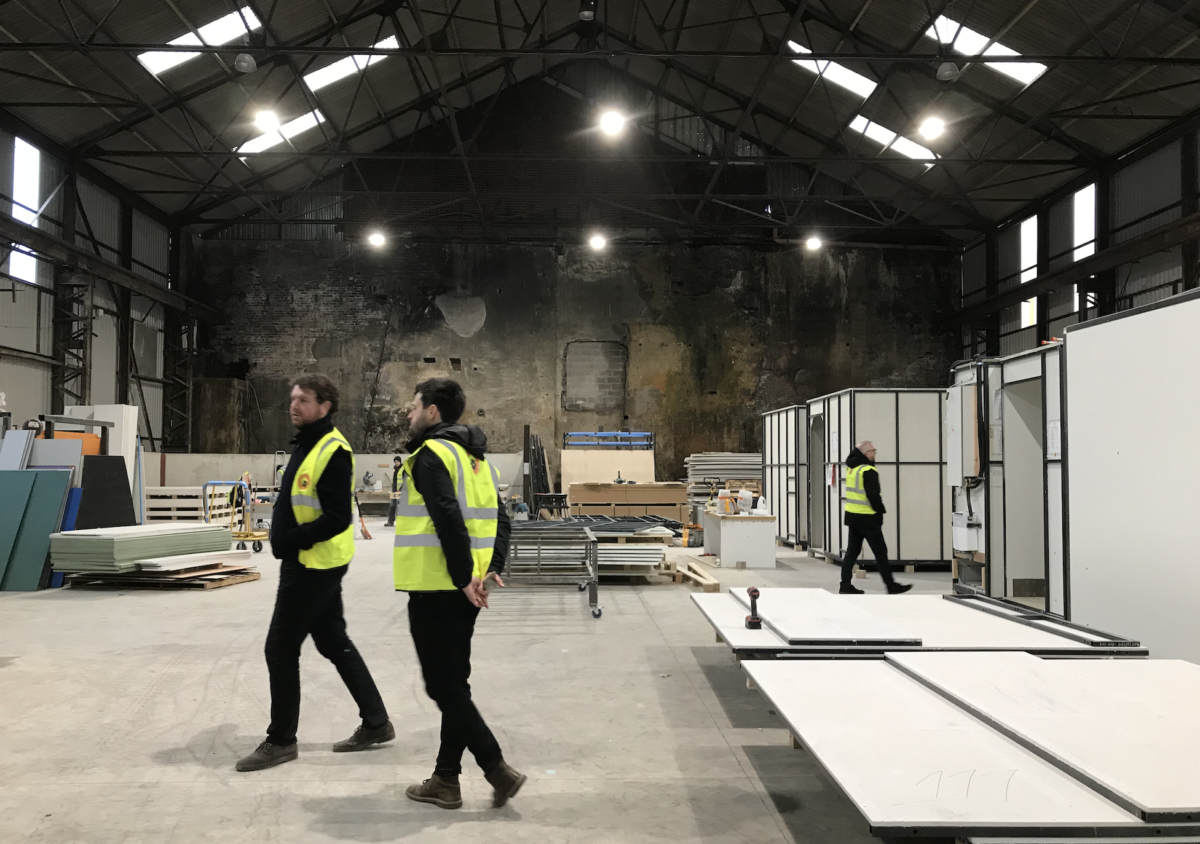 “OEP responds to both short and long term need for efficient spaces in which to live and work and ahead of our collaboration with the artist, Tim Denton, we’re considering how our design and fabrication techniques might be used in new and exciting ways. The magic of Art In Manufacturing, as we have seen from previous years, is that anything can happen.” Iain Crabtree, Managing Director at OEP went on to say – “We’re excited to work together with Tim Denton Studio – combining Tim’s exceptional ability to create crafted furniture, objects and structures – with our factories capacity in construction and industrial making. Tim also brings a unique method of making – co-designing with Blackburn College students who are studying electrical and mechanical engineering, subjects that often lead onto working in manufacturing industries and hopefully one day at OEP.”

Elena Jackson, Director of National Festival of Making and Curator of Art in Manufacturing said “Tim’s work is taking Art in Manufacturing forward, exploring a new intersection between place, community, education and industry. Whatever the outcome, it will be crafted by the artist and shaped by the skills inherent to the manufactures construction expertise, while having the place specific hand of the community running through it.”

During the COVID-19 pandemic, Tim Denton is working from a home studio from where we’ll be sharing behind the scenes stories on Instagram over the next few weeks. The National Festival of Making is currently postponed, therefore this commission will be presented at the next Festival, dates to be confirmed.

The Art in Manufacturing is a co-commission between the National Festival of Making and Super Slow Way.