INDUSTRIALISED: Art in Manufacturing in the Gallery

International artists uncover the humanity, brutality and ingenuity of factory production in a rare gathering of work exploring mankind and manufacturing in INDUSTRIALISED. 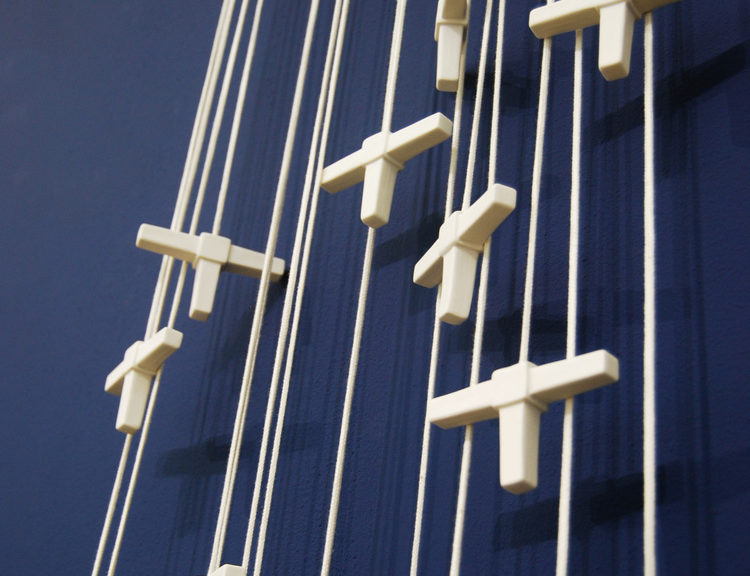 Featuring work unexhibited in the UK to date and providing a rare, multi-disciplinary view of the making industries, mass production, the human contribution to manufacturing and the physical impacts of factory making on our landscape, INDUSTRIALISED, Art in Manufacturing in the Gallery opens at Blackburn Art Gallery between Sat 15 June and Sun 15 Sep 2019.

The complex and evolving relationship between humans, the landscape, nature and industry is revealed most potently in photography, not least in the work of renowned, French photographer, Charles Freger (acclaimed for his 2012 Wilder Mann project) and his rarely seen, Bleus de Travail (‘Work Overalls’) series. Shown for the first time in a UK gallery, the portraits count as some of Freger’s earliest work and are the result of a long-term study of technical college students during the 90s, capturing the straight-faces, work stations and protective clothing of young trainees.

Each on the cusp of adulthood and entry into skilled employment yet still teenagers, the relative youth of these emergent carpenters, mechanics and stonemasons is evident in a trail of clues, whether in the condition and presentation of their clothing, their gelled hair or a stray earring. The series’ complexities are deepened by its apparent timelessness and each factory floor backdrop appearing indistinguishable from one town, city or country to any other around the world.

Using self-made pinhole cameras, Karen Mathison turns her attention to her native Ewood, a wooden area of Lancashire subsumed into Blackburn and repurposed for industry as the town boomed in the 19th century. Her large scale, black and white photography eerily fragments visions of the area, focusing on the route of the Leeds and Liverpool Canal, evoking a sense of loss, both of nature and depleted local industry evidenced by the ruins left behind.

Ceramic pieces resulting from a 2016 collaboration between André Stitt and Chrisoula Konstantakou, titled: The Christina Skelmersdale Ceramic Collection recalls a jet age era of hope and civic reengineering in England, drawing on a series of 1960s underpass reliefs in the Lancashire ‘new town’, created by then-resident artist, Mike Cumiskey. Taking patterns from the surviving, original public artworks, Stitt and Chrisoula’s suite of handmade and digital laser etched sculptures immortalise Cumiskey’s vulnerable original. The brutalist architecture of the post-war period also features in the work of Mandy Payne, painting onto concrete blocks the harsh vistas from one landing of a high-rise housing block to another and the stark, grey fascia of municipal buildings.

Simple, effective and enduring design takes centre stage with Jasleen Kaur’s Curry Measure, stepping back into the artist’s South Asian heritage, the history of the Tala cookware brand and the mid-century conveniences afforded home cooks. Made by hand in the same way as the original, iconic, Tala Dry Cook’s Measure in Liverpool using over 20 hand making processes, Kaur’s curry measure encourages intuitive cooking by eye, in just the same way her mother and grandmother did.

Kate Haywood’s purposely precarious ceramic works have their material properties in the foreground, with the artist creating hung pieces comprised of impossibly linked ceramic loops and scattered, strung components isolated without any obvious, practical use, being at once foreign and yet familiar in their wall-mounted formations. Haywood’s work was notably exhibited at Manchester Art Gallery in 2018, displaying the outcomes of her privileged access to the museum’s archives to inspire new work. Similarly, the nature of objects, making as art and methods of production circulate around the work of jeweller-artist, Zoe Robertson and a series of works titled RE: Animate Sensory Playground, the result of the artist scaling up jewellery making processes to reveal layered patterns within unusually organic, ornate sculptural objects.

Sue Rossiter’s family background in industry inspires her ceramic work, with pieces selected for INDUSTRIALISED crossing over into the world of glove making with techniques, materials and finishes synonymous with leather-working processes. Completed with both leather and thread elements, ‘End Tie’, ‘Finisher’ and ‘Iron II’ refer to specific techniques and roles in a glove-making process. Purposeful reference to historic skills and human roles, such as the young girls known as ‘end tiers’, a simple yet important role, and the distinctive hot irons used to finish each glove. Jason Taylor’s work, enhancing the apparently every day, manual, under-appreciated household object – the brush – to become pieces of furniture. After a factory visit in Leeds in which Jason saw the production of street cleaner brushes, he was inspired to bring their heavy polyester bristles and plywood together to create giant brushes anyone can sit on.

A stark, yet fictional visual account of the scars left behind by the mining industry in Europe is revealed by Pascal Ungerer, with a photorealistic painting of a place imagined. Evidently a place of recent, if not lost industry where humans are notably absent, Ungerer’s pink-hued landscape around a functional building in disrepair is surrounded, poignantly, by green mountains. Working in colour on board, Katie Watson’s playful work takes its cues from instructional illustrations, whether the instructions for making flat pack furniture at home, Airfix model kits or plans from factory floors, pieces she describes as ‘gap filling’ given the absence of completion in any of the diagrammatic drawings. Recognisable, yet obviously incomplete, the mechanical instruction becomes abstract rather than of practical use.

A video by Estonian artist, Maria Kapajeva, titled The Bright Way, echoing the Soviet propaganda film of 1960 that partly inspired the work, is drawn from a body of work that intersperses collective memory and myth with the artist’s dreams and her perceived failures of the worker’s collective story. Filmed in the now closed mill where the original film was shot, the artist interviewed a weaver inspired by the original propaganda film to pursue her life’s work there.

Alex Zawadzki from The National Festival of Making and Curator of Industrialised, said:

“Industrialised is an opportunity to recognise the powerful links between manufacturing industries and artists. Artists have continued to rely on the skills of fabricators, forgers, casters and welders to realise their creative works and place them in the public view. Artists from Lowry to Rauschenberg have been heavily inspired by the visual imagery of factories and the humanity of the industry working inside them. Industrialised is a showcase of contemporary artists and current approaches to working with, or reflecting on these same subject matters, and in this we can see a new set of social commentaries on industries deeply resonant effect on global and local politics, social structures and our environment today.”