Disrupting the everyday – reflections on Art in Manufacturing

On the surface of it, the idea of dropping an artist into a factory setting (or other manufacturing environment) then encouraging them to respond creatively, seems like some kind of mad science. You have an environment that is controlled, regimented, standardised… and then the image of an artist someone who represents freedom, self-expression, the individual. However, as anyone who has ever made anything (including artists) can attest, the relationship is actually very close. Both are a process that requires trial and error, innovation and discipline whether the product be a painting or a teapot. There’s just something totally thrilling about re-imagining or re-interpreting the ordinary. This is why I was so interested in Art in Manufacturing’s concept to pair artists with industrial makers. Arriving into Blackburn, a city with an incredible legacy of engineering and manufacture I felt excited. I wanted to find where the pairings had led the artists, and also what other visitors thought of the results. I was on a mission to collect peoples’ impressions and also to experience the artwork for myself.

There’s just something totally thrilling about re-imagining or re-interpreting the ordinary. This is why I was so interested in Art in Manufacturing’s concept to pair artists with industrial makers. Arriving into Blackburn, a city with an incredible legacy of engineering and manufacture I felt excited.

A short walk out of the station I encountered some of Dan Edward’s sign works featuring unexpected slogans, such as ‘disrupt your everyday’ and ‘forget about being cool’ they were funny…somehow both inconspicuous and audacious simultaneously. I loved them. I knew Dan from his work as a professional framer, but I hadn’t seen him for years. I made way down towards Church Street where he had an exhibition in the gallery space situated there, and it was a joy to see him again and this time in the capacity of an artist. He sat at a desk distributing lush coloured limited edition prints with large coloured dots on. The idea was that visitors go out and spot all the signs, then come back and he would take a stamper and ink the dots with the slogans.

To the side of the desk stood his daughter Mary. I asked what she thought of Dan’s work:

“I like art in general. I especially like art that has type in it. I find words easier to understand than pictures. Words are more direct…but it is true that some words can have many different meanings. That’s why I really like his work. Of the signs, I like the one that says ‘Let yourself be bored’ most. That’s because sometimes I like to be relaxed and not do anything, especially in the mornings… I hate getting up sometimes! The signs kind of give you permission to do what you want. I like slogans. In school we made a mural with lots of slogans in it. Mine said ‘Be whoever you want to be'” Mary

To the front of the Church Street gallery space was the work of Anna Ray. Anna was paired with Forbo Flooring manufacturer. For her presentation she had produced some gorgeous textile pieces made of off cuts she had found in the factory. For one work she had strung up thick stands of woolly fibres, in a variety of colours, mostly a deep navy, each strand intermittently winched in by satisfyingly rich bands of fuzzy coloured fibres. Owing to the vibrant and joyful colour palette it was extremely easy to instinctively feel positive towards it, though it had an uncanny quality to it… what was this thing we were looking at? How did she know where to start when she created these pieces?

We talked for a little and she described how maybe even when the work may seem random, that somehow, once you started delving into the material, its scale, its colour, its character somehow found its own logic. She described how for one work the strands were meticulously labelled and re-installed exactly the same way, with the various tentacles of dangling wool hanging at the exact same length towards the floor. This was essential to get the right ‘feeling’ to the installation. She also described the balance and harmony she found in the work and how it was important to level out some of the richer colours with the more muted. 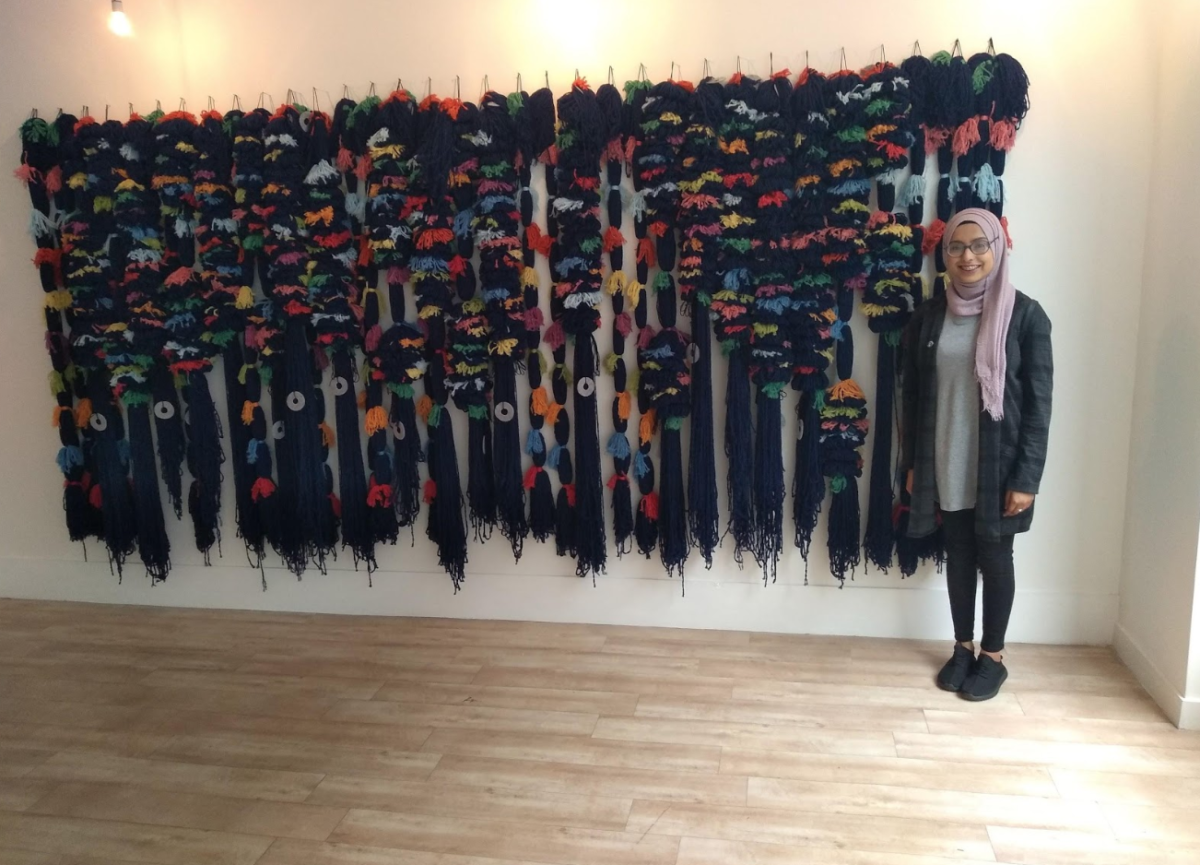 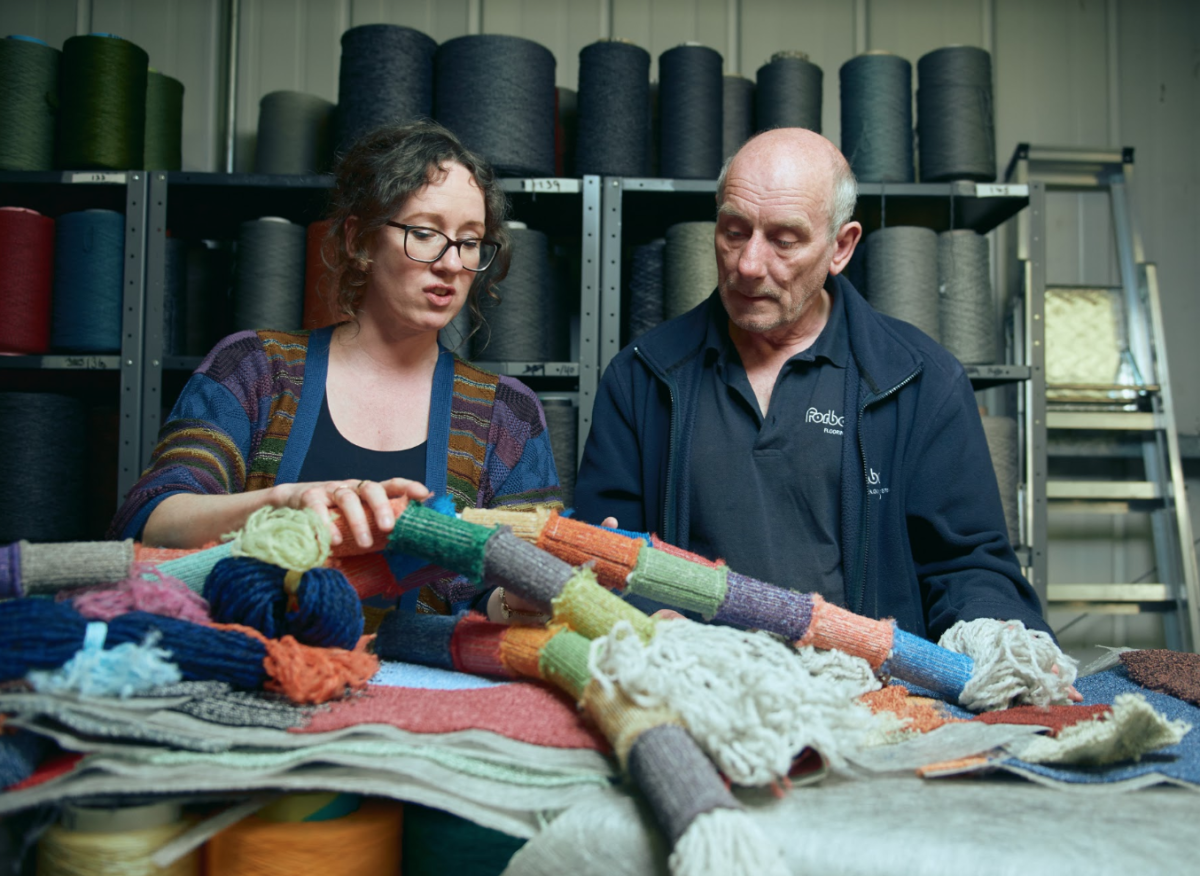 Zeba next to Anna Ray’s Offcut (2019),  and Ray in the Forbo Flooring factory.

Talking to other visitors they also had a hugely positive response to the work:

“The work (Anna Ray’s)… people seem to love it, the audience feedback has been great. When I think about art I always think about paintings, but I’ve never seen anything like this before, I think it’s just beautiful.” Zeba

“The artists that have really stood out to me are Dan Edwards and Anna Ray. Dan’s work is really thought provoking, I love that it has such a positive message in it. Anna’s work is just beautiful. I love the colours, the textures, the levels… its flow. This piece in particular makes me feel calm and tranquil.” Karen

The final artist exhibiting in the Church Street space was Amy Pennington. She too was in the space on standby to help explain her work face to face to visitors. It’s always so much more rewarding to get to speak to an artist directly about their creative motivations. Of all the artists, Amy’s work most examined the human relationship between maker, product and product user. Paired with Heritage Envelopes she was particularly interested in how each envelope they produce bear the initial of its maker printed inside. Being told this was like being let in on a secret. She posted out hundreds of letters out to residents inviting them to pose questions to the fabricators, these were then protected on to the wall and in turn so were their responses as part of the exhibition. What did your mother and father do? Was one. Amy’s work touches you, it makes you think about the human behind these machine based things which quite incredible.

Paired with Heritage Envelopes she was particularly interested in how each envelope they produce bear the initial of its maker printed inside. Being told this was like being let in on a secret.

“Amy’s work is really appealing to me, it’s why I came into the exhibition space today because I had already heard about, it’s very interesting that she’s looking at the history of how envelopes are made. It’s not something you would normally think to think about. I also like Anna’s work, it’s not the first time I have seen art that uses carpets. I used to have a neighbour, he was wonderful, he used to make the most beautiful carpet art. He was commissioned to design beautiful borders along hotel corridors, carpet mosaics, things like that. You can create a lot of beautiful things with carpet, the colours… by splicing them up. 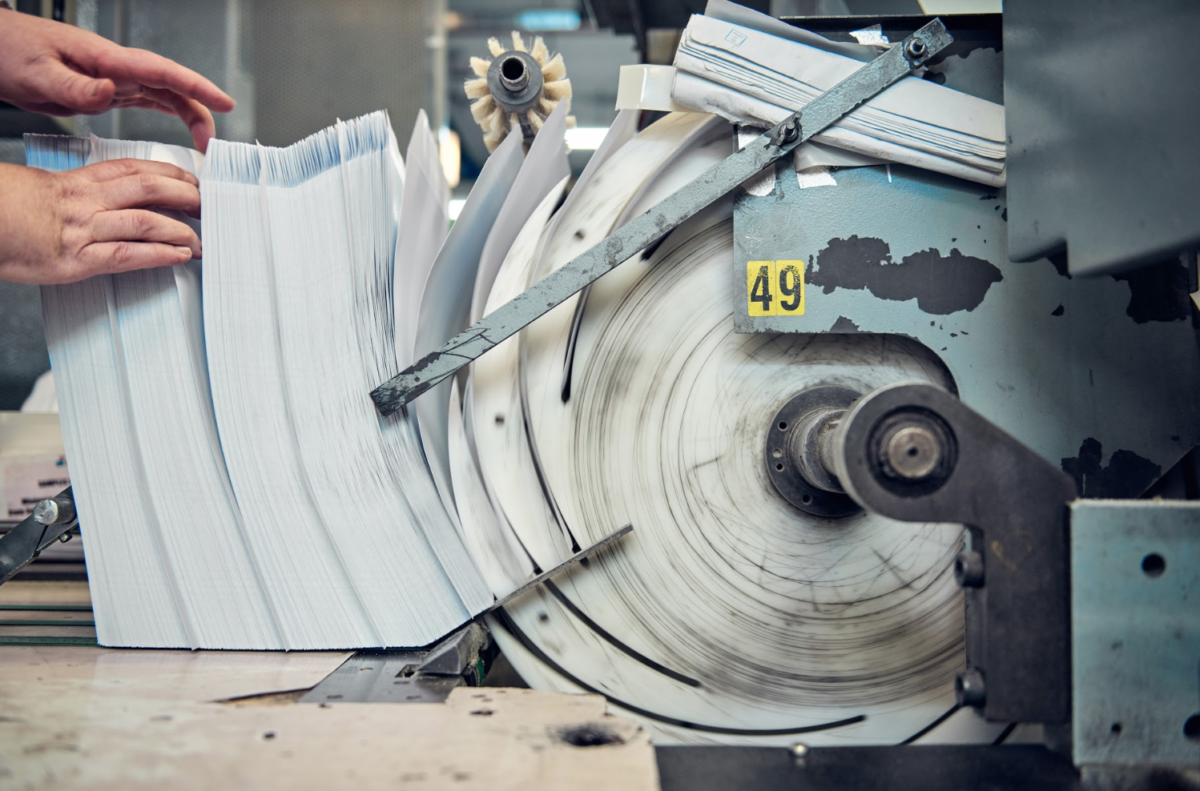 Capturing the hands of manufacturers at Heritage Envelopes, during Amy Pennington’s residency which ultimately inspired the work Return to Sender (2019); delivering 10,000 envelopes to Blackburn postcodes.

My husband and I came to Art in Manufacturing last year too, we love seeing what people do with their crafts. Me, I like to sew. I have just bought myself the most beautiful vintage Singer sewing machine, it’s black. The new machines, they just don’t last. I like to make clothing, I made this bag in fact! If I had more time I would like to design a capsule wardrobe especially for people with mobility issues. Comfortable, practical but beautiful clothes. That’s what I’d make.” Linda

It’s Raining Cats and Cogs. Walking back on to the rainy streets of Blackburn I enjoyed some more of Dan’s street signs. I stopped to ask a lady whether or not she had spotted them in the streets.

“Yeah, I have noticed these signs out in the street, I read them all as I walked up the road. I think they should be here permanently. ‘Disrupt your Everyday’ this one says… I tell you what, I disrupt my day everyday anyway, ha! Yeah, these signs make me smile” Audrey 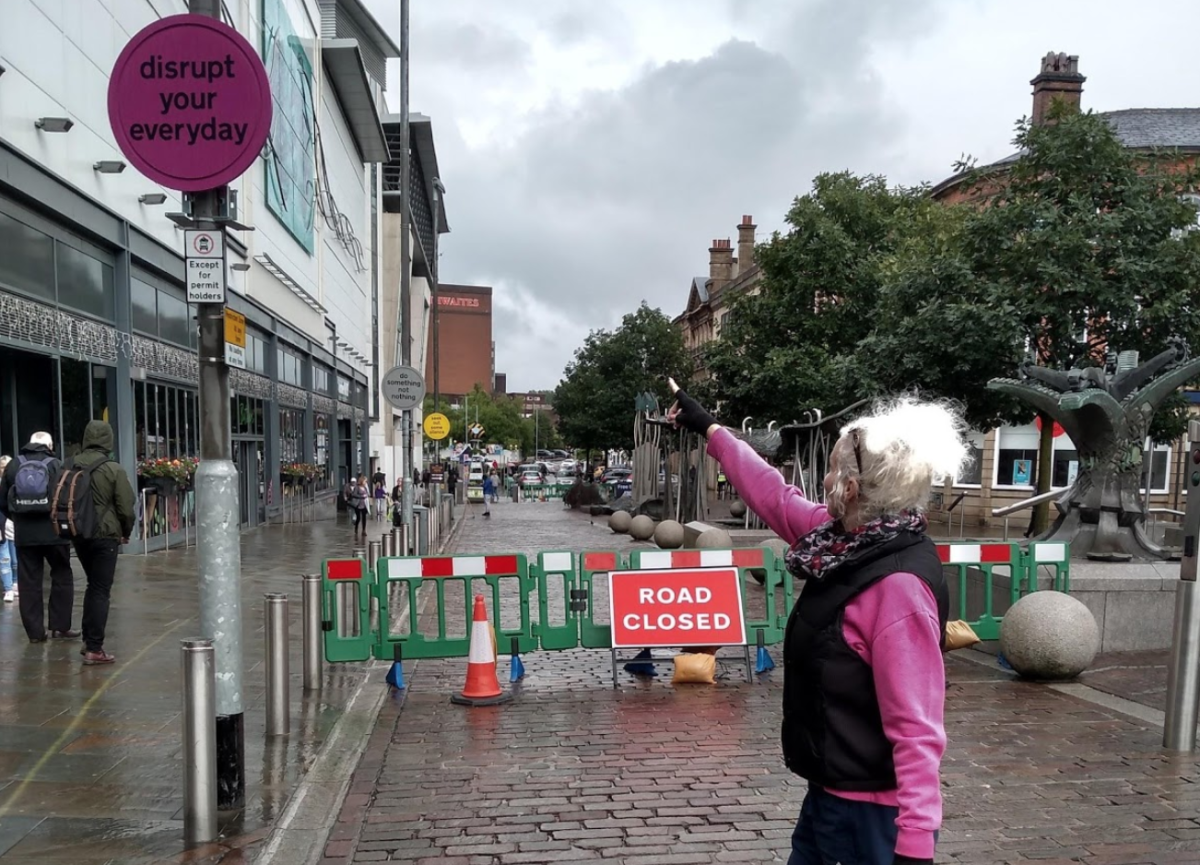 Audrey looking up at Dan Edward’s signs for we can do more (2019) and behind the scenes of making the signs, featuring potential colour swatches.

I made my up towards the Liz Wilson’s work exhibited in the 29 Northgate space. Liz had arranged multiple TV monitors on grid of floor-based geometric stands. On the screens glowed imagery of black and white stripes, rotating cogs, simple lines that expanded and contracted. The imagery pulsed and bobbed to hypnotic effect. The work felt like it had its own forward momentum, its own frenetic, robotic energy.

“How does this work make me feel? I really like it, it harks back to analog days. It reminds me of test cards you used to get on the telly” David

“I’ve never seen something like this. It’s kind of an illusion. I hurts my head a bit. It’s something different. I like it.” Nadim

The last artist’s work I visited was in Prism Contemporary. It was here I was lucky enough to be given a guided tour with some other visitors by the artist herself Daksha Patel. Daksha was paired with Blackburn Yarn Dyers, whose work it is to dye imported yarns to the exact perfect shade specified by various sometimes luxury clientele. For Daksha the science of how the colour is created, which is only possible by understanding the molecular makeup of that particular fibre and how it will respond to the dying process, is just as inspiring as the colour itself. Her resulting works reflect both a scientist’s and artist’s eye.

“I’ve never seen something like this. It’s kind of an illusion. I hurts my head a bit. It’s something different. I like it.” Nadim 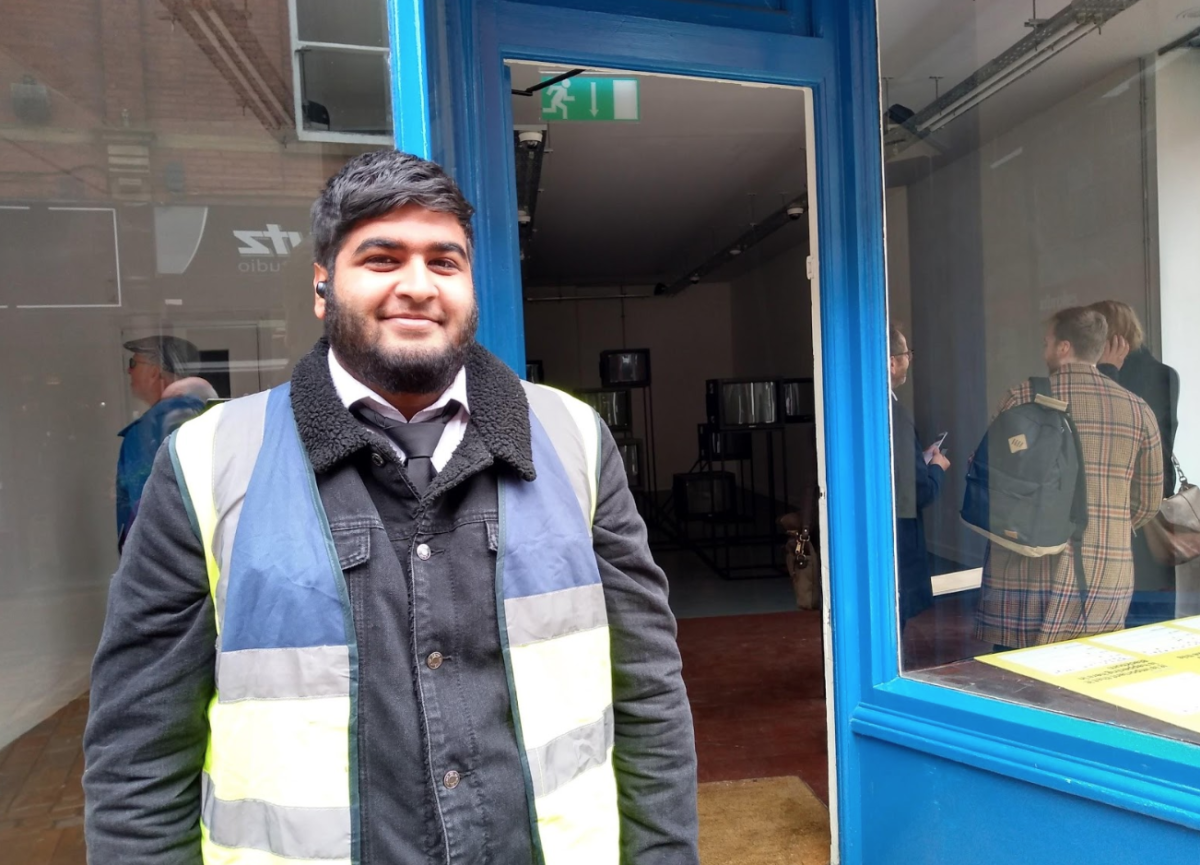 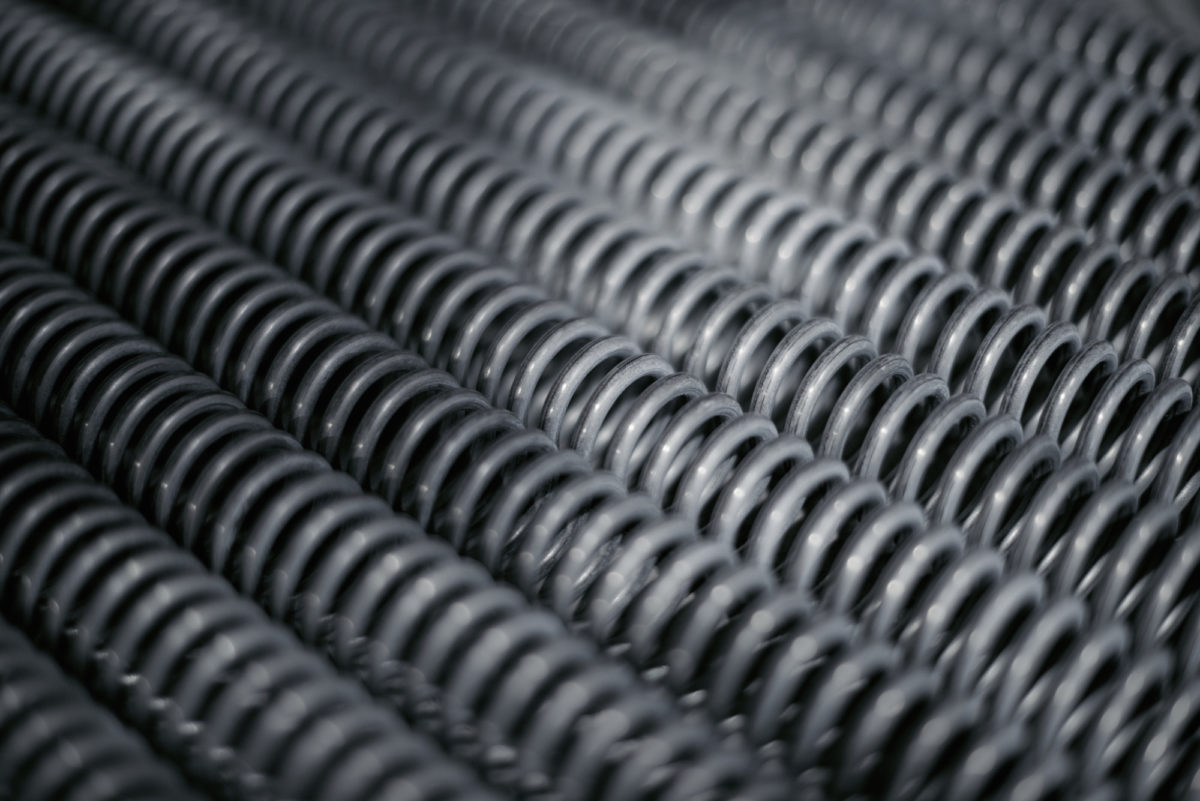 Nadim outside 29 Northgate, and close ups of factory equipment at Spiroflow that inspired Liz Wilson’s The Optical Mechanical (2019).

“The most interesting part of this work to me is the artist’s relationship to the manufacturer. I didn’t even know there were still active yarn factories in Blackburn. It makes me think about what happens next in the process, and I love the colours. If it wasn’t for this artwork I wouldn’t have even thought about the manufacturer involved with this product to be honest.” Gareth

A highlight was her encouraging us to view a wall based work from both the right and left angles, given its construction the complementary colours sang in completely different ways.

Many of these employees had come to visit the exhibits. The artists described a renewed respect for the care, the dedication and the meticulousness of the processes that go into the manufacturing their ascribed products, and the honour it was to be able to have a glimpse behind the curtain where they are made. It inspires me to find art everywhere.

The work that the artists have produced with their respective manufacturer pairings has proved that there is a magical alchemy to this process. The standard of work produced is incredible, but not only that, all the artists described how important it had been to make personal connections with the employees at the various manufacturers. Many of these employees had come to visit the exhibits. The artists described a renewed respect for the care, the dedication and the meticulousness of the processes that go into the manufacturing their ascribed products, and the honour it was to be able to have a glimpse behind the curtain where they are made. It inspires me to find art everywhere.

During the Festival of Making 2019, we presented the outcomes of Art in Manufacturing: Season Three, including artists Daksha Patel, Anna Ray, Dan Edwards, Amy Pennington, and Liz Wilson. Find out more about the commission here. Images by Daniel Allison, and Ellie Nicholls.